↓ Skip to Main Content
Home › Reviews › Is Indiegogo A Scam?

Is Indiegogo A Scam? 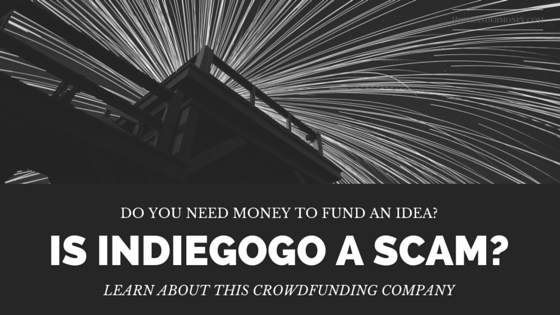 Is Indiegogo a scam? What is Idiegogo?

This company was founded back in 2008 in the greatest city by the bay, San Francisco. Indiegogo was a real trailblazer, as it was one of the first companies to offer crowdfunding. Crowdfunding helps people get much-needed money to further their movie, idea, business, charity, book and just about whatever and I do mean whatever, as you will see later. Famous actors, like James Franco, used Indiegogo to fund his Palo Alto Stories, Indie film for example.

Indiegogo is the platform from which entrepreneurs can create a campaign to raise money and to have contributors (donors, investors or customers) fund a campaign, by donating money. Whereby, Indiegogo takes a slice of the pie, a 5% cut from contributors donations. If thru a credit card the CC takes 3% and $0.30. With an astounding 15 million visitors to their site a month, they sure do have the eyeballs to help get your campaign funded.

As you would imagine this is just ripe with the people wanting money for fictitious ideas or scams or just pure laziness. On the other hand, it is filled with positive socially benefiting ideas that need to be funded to make this a better world to live in. The yin and yang, the good and the bad. Revolutionary ideas and platforms are just plagued with scams as well as legitimate social causes.

What do people get for contributing to a campaign? Well that varies, as each campaign offers something different. Perks can be in all forms, sizes, and prices.There are rules as some things that can’t be used as a perk.

Some examples of perks.

There is basically a three-step approach to get a campaign going til completion.

Some Examples of Successful Campaigns At Indiegogo

An example of a successful pitch video that was funded at Indiegogo.

Who is Indiegogo for?

For anybody, for whatever reason, you can create a campaign at Indiegogo in the hopes of having money donated to you. Yep, anybody. It’s great for raising money for social programs that would otherwise get no funding. This is the true shining beautiful part of Indiegogo, being a part of a greater cause and contributing to it.

The training and tools to get your campaign off the ground at Indiegogo are vast. They have a pretty thorough training from running a campaign to contributing to a campaign. They even have a downloadable free Film Handbook to help with your video production.

My Final Opinion of Indiegogo

Is Indiegogo a scam? Obviously, Indiegogo isn’t a scam but…there can be scam campaigns within the Indiegogo site. How do you find out which one are the scams? There are many legit campaigns that deserve getting funded and many scams that don’t deserve even the time to read about them, let alone watch a video about them. Some scam campaigns are easily detected by our bullshit meter and others that seem legit but are not in fact not legit. As some nefarious individuals copy legit campaigns and just change the name to appear legit. As mentioned above, the YouTube Channel iDubbbzTV runs through some of the dishonest ones, and you can get a sense of the tactics used to better inform yourself. Also check out Indiegogo post on How to Evaluate a Campaign, before contributing, which gives some good tips to avoid the scams.

Yes, there are scams at Indiegogo, but also there is greatness, the greatness of humans, its when we as humans look outward and want to make a bigger positive effect on the world and have legitimately found a way. This way needs money, and this is a great platform for this to take place

Indiegogo at a Glance…

If you have any questions or comments, I would be more than happier to answer them. Thanks.

38 Comments on “Is Indiegogo A Scam?”